It might surprise you to know that not every English major wants to be a teacher. I know, because I am an English major, and I have never had any intentions of teaching. Even when I was a Spanish major, I didn’t think I would be a teacher.  I don’t like talking in front of groups of people. I mostly don’t like being the focus of everyone’s (or maybe lack thereof) attention.  That’s why we like to write; we’re not people oriented. Writing requires very little human interaction, you know.

I’m also way too nice and would probably give every student an A regardless of whether or not they earned it.

Anyways, yesterday I was telling someone this again for what has got to be the millioneth time. “No, I do not want to be a teacher.”

I do want to be a writer. Duh. Almost every (if not really every) English major that I know of yearns to write something (for me, preferably a book, but hey I’m not too picky.) and to have it published.  That’s why we picked the English major; we like words.  We like correcting people’s grammar and we all roll our eyes when people get things like your and you’re mixed up or their, they’re, and there mixed up. Playing games like words with friends is like crack for the English major.  Trust me on this one; I know.

I was telling this to a guy who is currently a pharmacist intern at my work.  He already knows he is going to be a pharmacist when he graduates and grows up. Like most people who find out I am a college student he was intrigued that I am going to school and wanted to know what I was studying.  I think I was supposed to give a logical answer like nursing, or accounting, or something that will lead to a definitive job, like teaching.  When I explained to him my plan; that is, get a degree in English, go to law school, and continue to aspire to be a professional writer just in case the law gig doesn’t work out (or…vice versa, I suppose), he made some random weak joke about writers.  Jokes like these are funny: 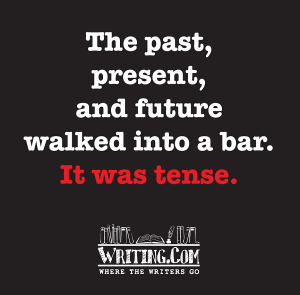 But his joke? Was totally not funny. In fact, it was so not funny that I forgot the joke. All I know is that the punchline was that a writer can’t support a family of four. Um, I know that it’s a long shot. That’s why I’m not just banking my entire future on a writing career. One can have dreams, can they not?

(He completely glossed over the law school part because he couldn’t get past the writer part).

But honestly, if I wasn’t a 40 something year old with 4 mouths to feed, I would keep going to school forever. I would keep taking English classes until I ended up with a PhD, and then introduce myself as “Dr.Resa (insert last name here). And then I’d probably start working on another degree, perhaps in Sociology or another field that I happen to like but that wouldn’t likely land me a job. Eventually, maybe I would cave in and teach.

Anyways, my guess is that if you hated writing papers in school or you hate writing anything now, that you likely won’t understand then why anyone would want to go to college and major in English, only to polish your writing skills and have to write even more. But hey…according to one of my professors, college graduates with a degree in English are currently in “hot demand.” And we are apparently a versatile bunch, working in all sorts of professional fields from teaching to web design.

Most of us, like me; if we don’t get a job teaching;  will likely find a job that is only vaguely related to our major, unless, that is, we are fortunate enough to strike it big and become a famous published author, and are able to quit our jobs, because we are all working from the comforts of our homes in our pajamas or at the beach or where ever it suits us, working on our next great work.(like me, I hope).

Seriously, though, most English majors have no clue what they want to do when they graduate from college (not me; I have a plan, which involves going to even more school).  Inevitably, when one of my professors asks the class what they intend on doing with their major, the most popular answer is “get a job.” It’s a close tie between that and “move out of my parents home.”

Luckily for me, I’ve already done both of those things.

Anyways,  maybe it doesn’t make sense to you or anyone else, but it makes sense to me.  I guess in the end that’s all that matters.

And hey, it could be worse; I could be a philosophy major…right?

2 thoughts on “The Truth About English Majors”

Coffee...with a cup of chaos

The Autism Spectrum According to Autistic People