Autistic Musings / blogging / Random Life As I Know It

Out of all of my kids in general, H is the one who challenges me the most. The first time he rode in a police car, he was two. He was in his pajamas and I thought he was in bed, sound asleep. Little did I know, when I was downstairs folding laundry he had wandered out of his bedroom, outside through the patio door, and over to the townhouses that bordered our back yard. Some random, caring person found him that day. They apparently saw this red headed little boy in his pajamas; peeking inside their patio doors. I don’t know if he was confused and thought maybe he was at our home. The people took him inside and called the sheriff,  at the same time I was hysterically talking to dispatch.  In a matter of minutes The sheriff brought him home, my two year old baby boy sitting in the front seat of his police car.

Since he is autistic we have always had to keep a closer eye on him; closer than a typical functioning kid his age. After that day when he was two, we never had a problem with him wandering from home. As he got a little bit older he could go outside and play independently; he could easily become engrossed in playing in the sandbox (usually letting the sand run through his fingers, or filling and dumping it out of a plastic pail). He never left the sandbox even though we would still check every 5 minutes just to make sure that he hadn’t wandered off like he did the first time. We probably got a little too overconfident.

A few years later, when he was six,  he ended up in a  police car again. That day we had been at an air show; where there were not only thousands of people crowded in a small area, but a multitude of air equipment, airplanes, noises; things that greatly affect a child with sensory issues. It would have been easy to lose him, but we didn’t. We took turns watching him and making sure that he was always within our line of sight.  Whenever he turned a corner or moved further than 3 feet, we panicked, and moved quickly to find him and bring him back closer to us. I honestly don’t know how we didn’t lose him that day.

All the way home we remarked at how we were so sure we were going to lose H and then didn’t. We praised him for a good job and for not wandering off.  We told him that he had been good and let him run to the back yard to go play in his sandbox. We stood there and watched him play and get engrossed in his own private, little word. That’s when we heard the sirens, and we turned around to see three police cars speeding by, and we joked how it was a good thing that they weren’t stopping at our house. Then we thought we should go check on H in his sandbox. We panicked when we realized he wasn’t there.

We ran in the house in case he had gone inside. We looked in every crevice of the house; but after a few minutes it was clear to us that he wasn’t anywhere in the house or garage.  In fact, he wasn’t anywhere on the property. His dad got in the truck and drove off looking for him. Instead of coming back with H, he returned with a sheriff deputy, who had just been at the scene that the sirens were headed to.  It turned out that he had one of those dogs who can sniff out scents and find drugs or human beings. The dog (a large German Shepard named Buck) ran off towards the back yard, tracing H’s scent.

I’m still not sure how those dogs can track a scent like that; but as soon as Buck started sniffing around our back yard near the sandbox, he picked up a scent and took off in the direction of where he thought H might be. After about 5 minutes, Buck found H. He hadn’t gone too far, but far enough. For the second time in his short little life he got to ride in a police car, and he added three more rides after that. I’m telling you; the kid likes police cars. He hasn’t been in one for a few years now. I hope it stays like that.

(Side note: Buck died in the line of duty a few years ago. The sheriff department has a nice memorial set up at their station).

He loves to wander off and won’t respond to anyone if they were to call him by first name.  If it weren’t for these I wouldn’t even take him to Target: 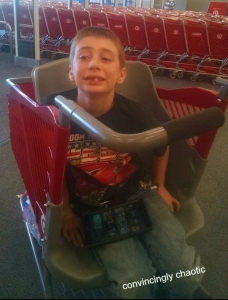 I absolutely LOVE these carts!

Now days he stays in the house just fine, but it is when we are out and about that I am constantly looking around to find him.  He wouldn’t respond if someone called him by name, and if someone were to approach him, he’d echo what they said and would do that repeatedly.

I will always worry about keeping him safe.

Click Here For more information on the Caroline’s Cart.

Information about the autism spectrum from autistic people

Convincingly Chaotic
The Art of Blogging

Slogging through my life, one cliche at a time.